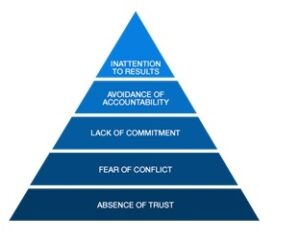 Whether it’s a supported living service or a school, teams working together constructively are essential to the success of that provision, to the successful outcomes of those supported or educated and to the implementation of PBS.

In this blog we look at a model for understanding what can go wrong in teams and why. This is described in the book The Five Dysfunctions of a Team by Patrick Lencioni and is based on the idea of a hierarchy (yes another triangle, but we’ve made it blue to avoid confusion with our red tiered PBS triangle!). Barriers or problems at each level give rise to issues at the next level, and so on.  However, problems can start at any level in the triangle. Getting PBS into place requires lots of teamwork.  This model makes sense if you think back to any team that you’ve worked in that did not seem to be pulling together.  It also goes some way to helping us understand factors that might be involved in teams not following PBS plans, provided all other elements of assessment and consultation have been covered.

The first issue is an absence of trust among team members. This comes from people not wanting to feel vulnerable within the group. Team members who are not genuinely open with one another about their mistakes or weaknesses make it impossible for the team to trust each other.

The issue with trust is a problem because it means that the team will develop a fear of conflict. Teams that lack trust will not get involved in a passionate debate of ideas or plans.  For PBS this means that strategies or ways of supporting someone will not be properly discussed  Instead, there are back door discussions and guarded comments. Leading to a lack of clear plan across a team.

A lack of healthy conflict is a problem because it results in a lack of commitment. Without having aired their opinions in the course of open debate, team members rarely, if ever, buy in and commit to decisions, though they may pretend to agree during meetings. So if a team haven’t been able to discuss a specific support plan, there may be an appearance of agreement….. and then we wonder why the plan isn’t being followed, if everyone appeared to agree.

Because of this lack of real commitment and buy-in, team members develop an avoidance of accountability.  Without committing to a clear plan of action, no one will call out their team members on actions or behaviours that are contrary to the aims of the team. When a team is working together well they will respectfully challenge someone in the team who isn’t following the plan, pulling them back in line with the rest of the group.

Failure to hold one another accountable creates an environment where there is inattention to results.  This happens because team members put their individual needs (such as ego, career development, or recognition) above the collective goals of the team. This often looks like a team losing motivation and not caring, when in fact if there was an agreed plan they would really put energy into it.

If you’re interested in receiving further blogs or information about PBS, training and offers to your inbox click here 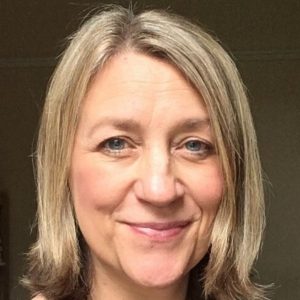 Kate has over 20 years’ experience of working with adults and children with intellectual disabilities and those who are autistic, both within statutory services and the independent sector. Kate has a Bsc Psychology, D.Clin Psyc & an MSc Applied Behaviour Analysis.